Android imposes limitations on the size of an app.  Some older devices have size limits, Google Play also restricts the size of apps that can be downloaded. EachScape offers support for apps that can overcome these limits using a facility of Android called "Expansion Files." Builds created with this method will go slightly faster as well.

Using expansion files is a simple process. On the Android tab of the App Edit page of the EachScape Builder, just check the box marked "Use Expansion File" and build the app. 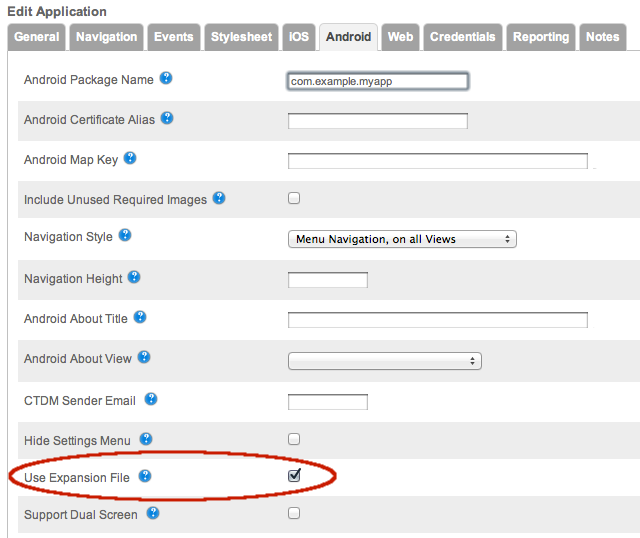 When the app starts up, the expansion file will be downloaded and remain on the device until the app is deleted. (See note below about Ad Hoc builds on Android 2.2.) If the Expansion File is ever missing, then the next time the app runs it will re-initiate the download process. While the download process is running a progress bar is displayed in the notification center. These files will only be downloadable in the presence of a WiFi network.

Builds are given an ID number. It's shown in the URL of the build when you are looking at the page in the EachScape Builder where the particular build is listed. Further down is a line showing the size of the expansion file and a download link. 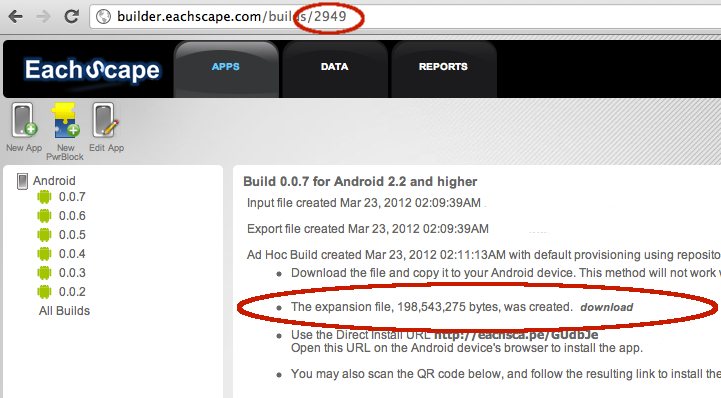 To submit a commercial build, you will need to download the expansion file and supply it as part of the submission process.

On the device the expansion file must be named according to the app package name and bundle ID. For commercial builds, the package name is determined by the settings you supply in the App Edit page's Android tab. For the app shown above, assuming its package name is "com.example.myapp" then the submitted expansion file must be named "main.2949.com.example.myapp.obb" The number selected must match the build ID as described above. You do not need to consider any of this when installing Ad Hoc builds.

This facility is supported on Android commercial builds for Android 2.2 and higher. It is supported for Ad Hoc builds on Android 2.3 and higher, and we have now added support for Android 2.2 as well. For Ad Hoc builds, the app will automatically delete earlier expansion files for that app at startup, so you needn't worry about the files clogging up the device. In Android 2.2, the last expansion file installed will linger on the device after deleting the Ad Hoc build. You will need to  manually delete it -- see the path and file name conventions below in the Appendix on Manual Install, for the file name and location. This is a limitation of the operating system.

1) Download the expansion file - that may be updated out of the build history, there is a link on the BUILD HISTORY page as indicated in the circled area in the illustration above

3) place this file on the SDCARD of the device using a mount and cable method, in the directory -

The system will then be able to find the expansion file and should open it upon next launch.