One important point is that EachScape offers the option of having separate configurations for commercial and adhoc builds (both QuickUpdate and Release Candidate builds fall into this latter category). The advantage of separating these is that you can avoid delivering test content to users of an app that is available commercially. If you don't have a commercial product out or do not wish to separate these two segments, you may use identical configuration for each of the commercial and adhoc build values.

You need the following values for the adhoc build.

Note that GCM Project IDs come from Google and must be input both in the EachScape Builder and the Urban Airship site when configuring push messaging for Android devices. If you will not be configuring Android, enter the value "none".

An additional triplet of values must be supplied for the commercial build of your app. If you wish to use separate values for each of these, you may. By using the same value for the adhoc and commercial builds, any messages scheduled for broadcast delivery via Urban Airship will be sent to both current commercial and adhoc builds of your app.

To configure the app in the EachScape Builder, go to the App Edit page. On the iOS tab, select Urban Airship as shown below:

Switch to the Credentials tab and find the 6 fields for Urban Airship configuration. 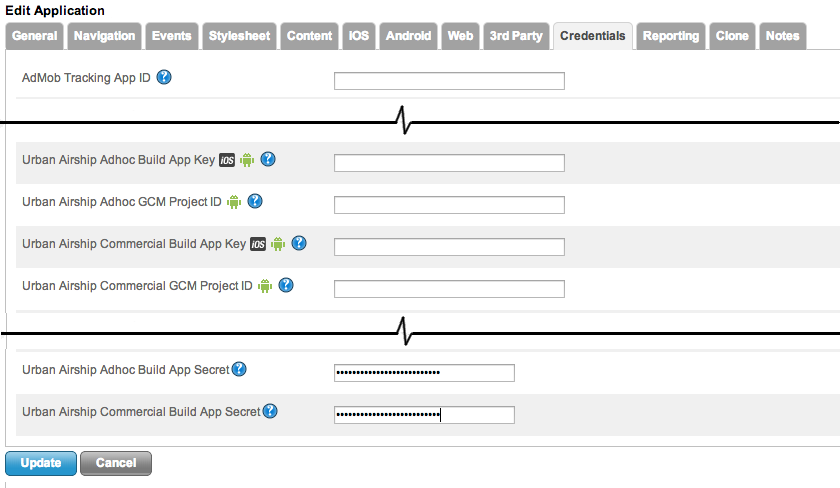 Note that you must supply all 6 fields. Duplicate the Adhoc values to the Commercial fields if you wish to use the same configuration for both kinds of builds. Enter the value "none" for the GCM Project IDs if you are not configuring Android push messaging.